Study: Too Much Television Increases Chances Of Getting Sleep Apnea

A recent study reveals less TV time decreases the chances of obstructive sleep apnea (OSA). Additionally, an increase in exercise was linked to lowered risks with the condition. The project was led by the European Lung Foundation.

This is the first research of its kind to review connections between sedentary behavior, physical activity, and sleep apnea. 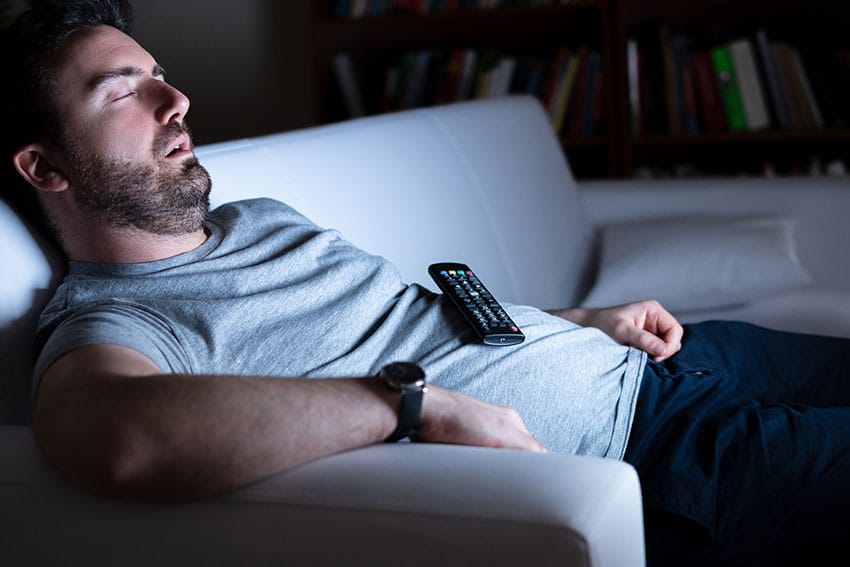 What Is Sleep Apnea?

It’s a condition that causes breathing to start and stop at night while you are sleeping. As such, your blood oxygen levels decrease. Symptoms include:

If left undiagnosed, sleep apnea can lead to other health conditions. This includes risks of strokes, irregular heartbeat, type 2 diabetes, and heart attacks. It’s also important to note that the condition causes daytime tiredness and fatigue. This can affect your work life and daily routine. The more tired you feel, the likelier you are to make mistakes. This can affect your career. It can also be dangerous when driving or operating a motorized vehicle.

This is why it’s vital to reach out to an Anchorage sleep apnea professional if you see any of the above signs. Treatment is key to ensure your sleep apnea doesn’t worsen.

More About The Study

The research team reviewed data of over 138,000 men and women in the United States. None of them had sleep apnea at the start of the study. However, by the time the study ended (10 to 18 years later), over 8,700 received this diagnosis. Study authors considered added factors that influence sleep apnea. These include drinking and smoking, body mass index (BMI), and age.

The lead author of the study chimed in on the connection between physical activity and sedentary behavior. Tianyi Huang noted the research team saw a clear link between these two factors and the condition. Participants following the current World Health Organization (WHO) physical activity guidelines and who spent less than four hours daily watching TV saw a tremendously lowered risk. The team noted any added increase in activity, also reduced risks.

It’s important to note, the WHO recommends at least 150 minutes of moderate activity, weekly.

Those who averaged three hours-worth of activity each week (about two hours of walking) had a 54% less chance of getting the condition. Meanwhile, individuals who were watching four hours of TV weekly were 78% likelier to develop the condition. Lastly, those working in sedentary jobs were 49% likelier to get sleep apnea.

However, the risks between “sitting” at your job, and “sitting” down to watch television were very different. Many tend to snack during TV time. This might include chips, cookies, and sugary drinks. This type of habit could result in weight gain, which is another risk to sleep apnea.

If you enjoy your TV time or work in an inactive-type job, the study offers hope. The report suggests exercising during your leisure time can help decrease risks linked to sleep apnea. As well, if you have a job where you are constantly sitting, try standing and stretching during your workday. If you do this as much as possible, you’ll see significant results.

Maintaining an active lifestyle, plus a decrease in hours you “sit”, can decrease your risks of OSA.

You want to do everything you can to reduce your chances of developing sleep apnea. Therefore, think about decreasing your inactive hours, while increasing your exercise time. Plus, try to lay off the couch-potato food while watching television. However, if you do receive a sleep apnea diagnosis, your Anchorage dentist can help.

The traditional treatment for this condition in the past was continuous positive airway pressure (CPAP) machines. Still, this therapy can be large, loud, and awkward while sleeping. Thus, making it hard to get a “good night’s sleep”. In fact, many individuals are turning away from CPAPs. These days, patients going another route by turning to oral appliances as a treatment for sleep apnea. These are custom-made for your smile. As well, the smooth plastic appliance fits like a mouthguard, perfectly. They reposition your jaw and tongue. This allows constant airflow while you sleep.

Your Sleep Apnea Specialist in Anchorage

If you see the above symptoms reach out to our team at Dr. Richard Crosby General & Cosmetic Dentistry. We are your sleep apnea specialists in Anchorage! We can help with diagnosis and oral appliance options. If you suffer from this condition, it’s time to get some relief! For you, and those around you!

To learn more about sleep apnea and how it can be treated, schedule a consultation today! Call us at (907) 277-1098 or book an appointment online.

Our office will be closed December 22nd through January 9th in observance of the holidays. Happy Holidays to you and your families! Call (907) 277-1098 to book an appointment. Ok
Go to Top